“What we live and what lives inside us.”
― Jokha Alharthi, Celestial Bodies

Literature in Arabic has contributed well- enough to modern world literature.  The Arabic novel is now a force to reckon with.  Some of the greatest voices in Arabic literature include Naguib Mahfouz (Nobel laureate), Elias Khoury, Taha Hussein, Hoda Barakat,  and Abbas Muhammad Akkad. Writers belonging to Egyptian Arabic are well- known for literary experimentation. Western literature also has been an influence.

The literature of Oman has always kept its distance from the mainstream Arabic literature. Though centuries old,  we couldn’t pinpoint some well- known names till recently. Everything had changed in 2019, when an Omani Novelist, Jokha Al Harthi, won the Man Booker Prize.  Now, there are writers of renown such as Dr Abdel Aziz Al Farsi ( Earth weeps, Saturn laughs).

Jokha Al Harthi, famed for her winning of the 2019 Booker Prize, for her marvellous novel- Celestial bodies, is an excellent example of the emerging voices of women writers in Arabic Literature. She was born in 1978 and obtained her PhD in Arabic literature from Edinburgh University. This is the second novel by Al- Harthi. It was published as ‘Sayyidat- al- Qamar (Ladies of the Moon).  This is a novel about how societal changes have transformed the populace of Oman. Her other works include Manamat and Narinjah.

Divided into 58 chapters, this novel follows the stream of consciousness narrative. It tells the story of three sisters, who live in an imaginary village called Al- Awafi.

The story of Shadows

This novel is noted for its different narrative style. Set in the backdrop of an obscure hamlet named Al Awafi, the story develops through the thoughts of its characters. Azzan’s family is amongst the prominent families of Al- Awafi.  It includes Azzan, Wife Salima, daughters Mayya, Asma and Khawla. The novel begins with Mayya thinking about her past.

Mayya sews silently, or someone who doesn’t know her would think so.  She has a crush on the handsome Ali Ibn Khallaf. She prays every day to god for him but gets eventually married to one Abdallah, son of a wealthy merchant.  She can’t forget Khallaf, so in a bizarre act of revenge, she names her baby as London ( Khallaf is a wastrel who finishes his studies in London).

Abdallah has a strange past.  His mother had died mysteriously and he grows up in the shadows of his strict, disciplinarian father. He was brought up by Zarifa, a slave woman (she represents the slave trade which was prevalent in Oman).  She becomes a Surrogate mother for Abdallah.

Abdallah is always worried about the love Mayya has for him.  He is also broken by the death of his father.  Though their relationship wasn’t a good one, Abdallah misses his father.  He also knows that the world around him changes drastically.

If among the three sisters, Mayya is known for her silence, Asma is a book worm and Khawla is the beauty queen.  Khawla is in love with a handsome youth, Nasir. Khawla represents modernity.  Khawla, after lots of protests, marries Nasir, who works in Canada. Later she gets to know about the other ‘wife’ Nasir has in Canada.

Asma marries a painter, named Khalid.  Khalid teaches Asma the importance of having boundaries in relationships.  The novelist has tried to tell the story of a nation in transition through the three sisters. The love London, daughter of Mayya, has for Ahmad, a poet is an immature one. The novel ends with the death of Muhammad, the differently-abled son of Mayya.

The Politics of the Novel

This isn’t a political novel. Still, it portrays many of the troubling times the nation of Oman had to go through. The war of Jabl- al- Akhdar is one of them.  It was a war between the imamate of Oman and the Sultan of Muscat, who was propped up by the British.  Also, there are allusions to the Dhofar war, fought between the Communist insurgents and the government forces from 1962 to 1976.  Many of the characters are aware of the turbulence around them but takes apolitical stances.

Slave trade is one of the major themes of this Novel. Zarifa, a descendent of Africans who were taken from the African continent long back, represents intense suffering.  Zarifa’s son, Sanjar, hates his past and flees to Kuwait.  We can see the friction of modernity and traditions throughout the novel.

The emergence of a new voice in the Arabic Literature

Writers like Jokha Al Harthi represents a different kind of canvas. While not eschewing the past completely, they can look at the present.  Novels like these remind us that there are hidden gems in many languages, waiting for their turns.

Nonfiction November 2020: New on my TBR 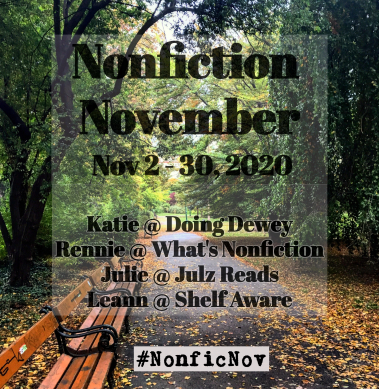